The History of Gortaneadin Grotto 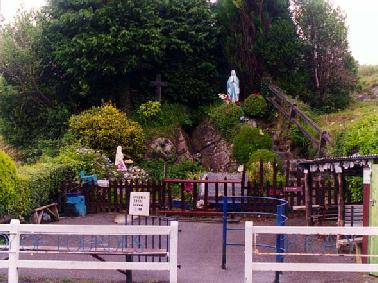 The Grotto was built in the 1960s by the local McCarthy family, as requested by their daughter, Mary, before her death in 1962. Mary's parents, Kitty (RIP) and John (RIP), have recorded the circumstances in which the Grotto came to be.

Kitty McCarthy: At the age of 4 years Mary had become very, very ill, and as a result of this illness she remained in very poor health for the remainder of her short life. It was this tender young age that Mary also began having visions of Our Lady in the bedroom of her own home.

On a lovely sunny evening in late February of 1954 when Mary was 8 years old, I, (her mother), brought her in an out-sized go-kart down the road from where we lived for a puff of fresh air. On arriving at the exact spot where the grotto stands today, Mary said to me: "Stop here Mama". I immediately thought that the little girl was getting weak or had some pain as Mary often haemorraged from the mouth and nose so I asked "Have you pain Mary or are you weak or tired?" and Mary said "Ah no, sure how could I be tired sitting in the go-kart. No that's not it, but what I want to tell you Mama (indicating the exact spot), wouldn't that be a lovely place for a Lourdes grotto for Our Blessed Lady. If the people passing the road only blessed themselves wouldn't they be honouring Jesus and Mary". She pointed up high to where Our Blessed Lady's statue would look best and to the big stone where she felt Saint Bernadette's statue should be placed. And so in those few humble words of that little child is contained the origin of Gortaneadin Grotto.

At that time the patch of ground was covered over in furze bushes and undergrowth. The stream was there winding its way down between the rocks and on that particular evening, around the big stone chosen by little Mary for the statue of Saint Bernadette, the little clumps of wild primroses were in bloom.

As her mother, I understood well Mary's great love of Our Blessed Lady and was not surprised to hear her make this request. I was fully aware that from the age of 4 years, when Mary became extremely ill, she was having visions of Our Blessed lady as she had confided all this to me.

Mary continued to have visions of Our Blessed Lady right through her short life and she had a vision of Our Divine Lord on the Friday night prior to her death.

John McCarthy outlines what took place on the day before Mary died: On Sunday, 25th of November, 1962, Mary asked me to take her to see a certain little grotto, which I did, and on our return journey home she asked me to stop at her beloved little spot of ground at Gortaneadin. As she wanted to enter the patch of ground and there was a drain of water between itself and the road outside, I lifted Mary across the drain. She asked me to crack two twigs for her, which I did, and she placed both of these twigs in the exact spot where she wanted the statue of Our Blessed Lady and the statue of Saint Bernadette to be placed (the exact spot where both statues are today)".

Thus Mary McCarthy outlined the layout of the grotto at Gortaneadin as she wished it to be. Mary passed away peacefully in her bed at 7.40a.m. on the next morning, Monday November 26th, 1962, aged 17 years.